Make suggestions for improving one of the best games on the net!
Forum rules
Post Reply
4 posts • Page 1 of 1

I would like instead of just normal and zoomed in, that the b keep cycle through those two and wide-angle. It could be very handy while on some structure launching GM's at people below me. Or just finding a roost and acting as ST spotter for the rest of the team.

I would then replace the Wide-Angle flag with a flag that would randomly lock your vision in to one of the three modes.
Top 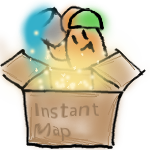 might as well have a rear view display also
For all of you who have asked what a hutty is, there is one as my avatar.