Thoughts on the layout? This is for a GCW Zero. BZFlag has a lot of (what I would consider) critical functions, and there are relatively a lot fewer buttons on most gaming handhelds than on PCs, so one has to be very selective when choosing the functions to map. The "Pause Menu" button would be equivalent to pressing escape. The "Messaging Menu" button would bring up a menu showing the chat console and options for sending messages. You could drive with either the D-pad or the analog stick. The "Radar Zoom Level" button would toggle between three levels.

by iObserve
It looks great, only thought would be to swap Jump & Slow movement. As "B" is the lower button, and jump would be most used.

That is all I have as far as techy-things-to-say.

by macsforme
The one critical function I forgot is binoculars... the limited number of buttons might require the mapping to have combinations of buttons for certain features. Here's an updated schematic with the B button set as "Alt" (to activate a secondary button function), Slow Movement moved to the X button, ID/Lock moved to the secondary function of the right trigger, and Binoculars added as the secondary function of the left trigger.

Gollum wrote:It looks great, only thought would be to swap Jump & Slow movement. As "B" is the lower button, and jump would be most used.

When you're holding this particular device, your right thumb usually hovers over A, and most other games use A as a primary selection key (or some other primary function), so I believe having Jump mapped to A would actually be most natural for a function that is used a lot.

And just a teaser so people can see how BZFlag might fit in on such a device... 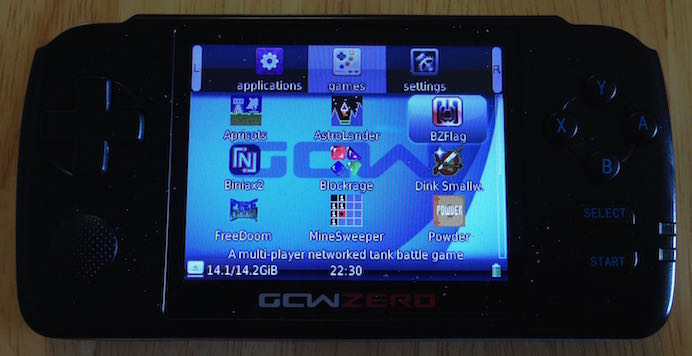 by iObserve
Ah, now that I see it, I concur... I would be hitting "select" quite often otherwise.

by macsforme
Here's an updated version with pause and self kill functions added.

Another interesting discussion would be how to make BZFlag playable on mobile device touchscreens (cell phones and tablets). There are a lot of issues that arise. The big one is how to steer the tank. A lot of devices have gyroscopes, but steering by tilt doesn't seem suited to sudden direction changes. Some devices have game control cases/add-ons, which are probably a lot more useful, but you won't always have them with you. Same with bluetooth controllers. As far as touch controls, you could define a circle on the screen, and treat it like a joystick, steering based on the finger position within that area. However, that is a bit of an awkward angle for your thumb (the way most people hold the device), and it remains to be seen if that kind of control would have too much sensitivity. Alternatively, the steering value could be clamped to eight directions at full speed.

Here's a layout concept I came up with. 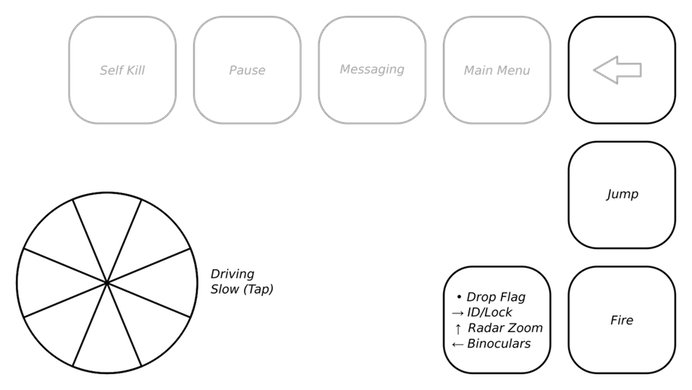 The bottom left illustrates what amounts to an eight-direction control. The button on the bottom second from the right side would have a tap function and three swipe functions. The button at the top right would toggle the grayed-out four-button menu. Obviously the radar would have to be moved so it's not under your thumb. Maybe to the upper left, or to the bottom center.

If you want an image you can download on your iPhone so you can feel what it would be like, try this.

by Sniper752
Looks good. I was going to suggest moving the ID/Lock button to a trigger, but then I read your update with the alt key which I like.
So when are we going to get BZ for iOS?