These are just a few things I noticed while playing, which could be improved.

Fog. While BZFlag does have options to render fog, all the objects except the ground are affected by fog, which makes the scene look weird (see attached).

Shadows. Shadows are rendered on the ground but not on other polygons. This might be ok for the pillbox map, but on some maps, such as Louman's Mystic Valley, rendering shadows becomes redundant, as the ground is not visible. 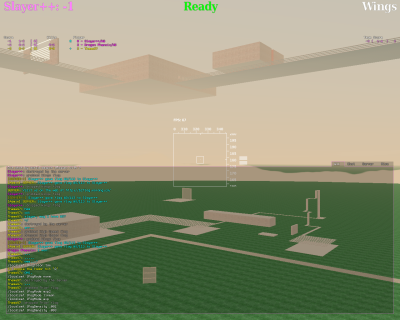 Re: Just a few things.

Slayer++ wrote:Fog. While BZFlag does have options to render fog, all the objects except the ground are affected by fog, which makes the scene look weird (see attached).

The ground seems to be affected by fog, it probably just depends on what type of fog you're using. Setting _fogMode to 1, _fogDensity to 1, and _fogColor to "black" is fine, except for the occasional ugliness on the ground. For a workaround, I set _mirror to "0 0 0 0.999" to make a black ground. Mirror doesn't seem to be affected by fog, though.

PS. Fooling around at the BZFlag Olympics, eh?

yes bzflag does not do self shadows, it's an enhancement that has been played around with, but is not easy to do well and fast in software and older cards, so it has not been done in the main game yet. It's a fair amount more graphic intensive then our current shadows.

Everybody has turned off shadows anyways, no?

Well duh. Who wants lighting and shadows to detract from the bullet heading right down your barrel?

I find that setting shadows to stencil doesn't cost much in performance, whereas stipple really burns up my limited graphics card. So I just leave it on stencil. I haven't seen many situations where shadows help much.

Lighting is a diferent story... I tried playing LaserMania with lighting off and man, that was tough.
Top
Post Reply
6 posts • Page 1 of 1