by I_Died_Once
Planet MoFo is pulling it off again this year!

Its the end of summer, and we're going to cap it off with the return of the Week of the Rabbit Hunt!

We're going to make mince meat out of the rabbit like never before! We'll chose rabbit by killer, by high score, and randomly! There might even be a progressive mode throw in!

That rabbit is toast!

Think you got what it takes to hunt the rabbit on Planet MoFo? Come find out! We'll see!!! 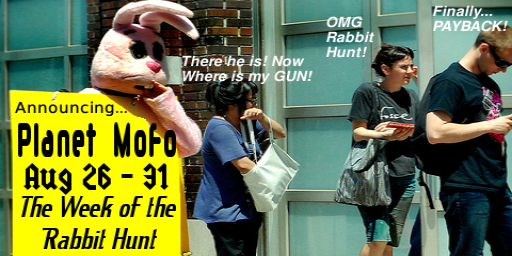 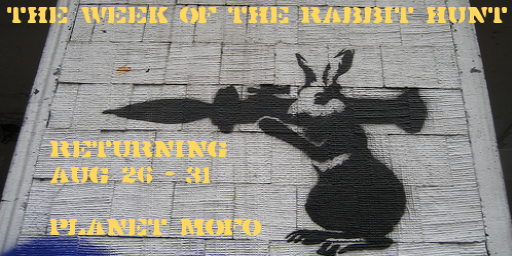 by Peter
Don't you have billboards to advertise this stuff on?
by I_Died_Once
One more ad: 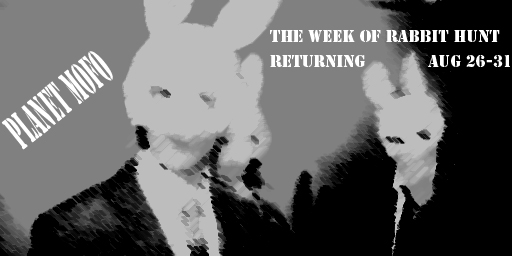 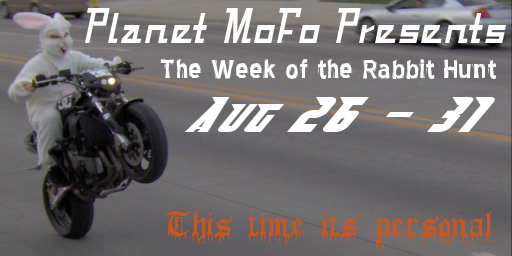 by Peter
Is that you in the bunny costume I_Died_Once

by Marines
LOL i would love it if it was!!! to bad u aint pink

by I_Died_Once
There is another one containing Playboy Bunnies that we were asked not to post on the forums. It's safe for work, no nudity and all - and it can be found on teh billboard rotation right now at the Passion of the Free For All.
by Shooting Girl
cool.. but 26-31 its back to school again for me

Shooting Girl wrote:cool.. but 26-31 its back to school again for me

That is entirely too unfortunate.

I wanted to post here and let everyone know we are working on a couple of mods to the rabbit hunt. One patch will teleport you to the top of the center cake upon becoming rabbit. It will even clear out the spot for you with a couple of world weapon shockwaves. Ain't that nice?

We also have a nice little stint with the Progressive plugin planned. Its going to be an active week. Most of your popular games are all CTF and FFA. This is our little effort to give Rabbit Hunt the attention it deserves.

Its going to be an action packed week - any and all input is desperately wanted. Tell us things you'd like to see us try, stuff you'd like to see. Constructive sriticism, DEstructive criticism - we'll take it all. Just - trust me when I say its not going to be a week where we just restart the server in "Rabbit by Killer" mode and leave it for a week. We're going to try and give each game mode / combination at least 12 hour runs.'

So make sure you check in throughout the week and look at what we're cooking up.

Believe me when I tell you - we ARE GOING to tear the rabbit a new one.

I'll be around for sure.. I luv rabbit hunting, but when im the rabbit.. i completely freak out

so i die anyways.. but im really looking forward to it..

by optic delusion
Don't forget we have a NEW rabbit plugin. This required a small bzfs patch to create an event when the new rabbit is chosen. Thanks go to Blast007 and JeffM.

Here's how it works...
The new rabbit is chosen. He is teleported to a new random location on the map.
Instantly a set of four shockwaves go off in a pattern around the new rabbit's new location. This clears the area around the rabbit, giving him time to defend himself.
The rabbit is also given one of five good flags. ST, GM, MG, A, or SW.

I think it's exactly what is needed for rabbit to play at MoFo. This will give the rabbit time to get ready for the onslaught, but it's hard to know exactly how something like this will play with lots of players, till we actually get lots of players on it.
It might need a tweek or two to get it perfect.
by Shooting Girl
sounds cool.. i'll be around

Here's how it works...
The new rabbit is chosen. He is teleported to a new random location on the map.
Instantly a set of four shockwaves go off in a pattern around the new rabbit's new location. This clears the area around the rabbit, giving him time to defend himself.
The rabbit is also given one of five good flags. ST, GM, MG, A, or SW.

Very nice idea- with the amount of people fillling up the map (and that tweaking). Good work JeffM, Blast007. Sounds fun.

Oh and that's some interesting advertising you have going there.
by diing for the team
you hould make a new map for the return of the rabit. The current mofo is getting kinda old.

diiing for the team wrote:you hould make a new map for the return of the rabit. The current mofo is getting kinda old.

Elaborate... which map are you talking about? We've only made slight changes over long periods of time. Let us know what aspect of whatever about it you liked and we'll give it an honest look.
by I_Died_Once
T O M O R R O W!!!

I can't believe the time is finally upon us!

Anyone got any last words of input? Things they'd like to see? Thoughtful changes? Anything???
by optic delusion
Like I said before, i think this plugin is exactly what is needed to run rabbit on the passion map.
Breaking from mofo tradition, we might not be releasing this plugin. It requires a server patch.
by Abominable
Let's have a awesome rabbit hunt week!
by I_Died_Once
What is the consensus thus far ???


thumbs up or down?
by birdie
I have some questions/remarks about this plugin (i played there yesterday a bit):

- I saw the rabbit spawning in the air somethimes, when it landed it was allready dead and stood no chance, maybe change that?

- Why not let the one that kills the rabbit stay allive? (And only change his flag into a good flag when his flag aint good), otherwise its a big surprised for him also where to spawn etc (and world weapon around him)

- If the rabbit shoots bullets but dies after, let those bullets "rabbit bullets" so the killed rabbit gets points when those bullets hit others? It's fair in my eyes cause they are shot before he died?

For the rest i like the plugin and its a good idea
by Abominable
For me, I would say thumbs up.
I like the new billboards, they are pretty fun to look at when you're jumping past them.
It's mofo, it's fine with me.
by Marines
2 THUMBS UP!!!
All times are UTC
Page 1 of 1