You are just not in tune with the ancient forces of nature DB. They have been around a lot longer then your bad 80's american cartoon shows.

Almost any cartoon from after 1965 is not worth watching...

sadly noodleman you are mistaken. There are many good ones. Your just thinking again in the american sense.

Many things these days are indeed crap but there are some good ones.

And other countrys make good animation.

yeah, king of the hill is a pretty good on i tell you wuht, cow and chicken was pretty funny in germany on cartoon network, southpark, spoongebob squarepants

one of my favs.
Top

Well, if you don't mind sex, gratuitous violence, and/or lame humor, then you're right

Sorry, dude Noodle, but Roadrunner is cute, and it's post-65.
-toaster
"So there I was, all alone, facing all of the enemy. I started driving in circles, until I had them surrounded, and then I escaped in the confusion."
Top

what cartoons do you watch noodleman?

The cartoons I watch are usually from the Golden Age (40's, 50's) . Warner Bros., MGM, some of the earlier Hanna-Barberas (before all that 80's Captain Planet crap

) And also, all the good Roadrunner and Coyote cartoons are before 65 when the WB animation studio was still owned by WB. There is a notable exception, called Soup or Sonic, directed by Chuck Jones, from the 80's somewhere when they brought the old-time masters in to do a few new cartoons to see if they could revive the classics.

I could go on and on and on about all the great World War II jokes, but I'll just recommend that you find a banned (from Cartoon Network for being politically incorrect) cartoon called The Ducktators, and spare me from having to tell you all the fun tidbits myself

It is in the public domain, so you can legally download it from Kazaa or some other P2P network.

And Tex Avery, what a sense of humor. I think he must have had ADD, he couldn't stick with any one character for too long like most directors.

And, you've got to love it when Jerry breaks Tom's tail across his leg, or cuts him in half, or almost chops his head off in the window sill

If you've got to ask me what my favorite cartoon short is that I've ever seen, well, you'll have to get back to me on that

what was that about "gratuitous violence" noodleman?

Noodleroni, you're mostly correct, but there are a lot of good cartoons that follow in the same genre as the golden-year toons. And there were a number of Roadrunner productions post '65. Go here: http://toolooney.toonzone.net/coyote.htm for an unofficial history that's pretty accurate.

I think Pink Panther is another example of good cartoons, perhaps not as artistically intricate, but still funny. The first one came out in 1963 and one from 64 won an Academy Award. The series didn't come out till later.

Certainly, there aren't many that fit into the catefory of "good" from post '65. But there are a few.
-toaster
"So there I was, all alone, facing all of the enemy. I started driving in circles, until I had them surrounded, and then I escaped in the confusion."
Top

and that episode of The Simpsons when they went to Australia
=D too funny!

I must admit, Samurai Jack is the first non-series toon I have respected the effort put into artistry. Many of the american toons look like they are drawn by, and scripted by a 5year old........which may appeal to their market, but I have very little respect for their efforts. several of the mizo films show a depth of script and attitude that I hold in high regard.
.........you kids, get out of my tank...........
Top

All images are missing for me...
Top

The justification is that it's bloody hilarious!

I think noodleman needs some bebop.


an Aqua Teen Hunger Force is funny too . 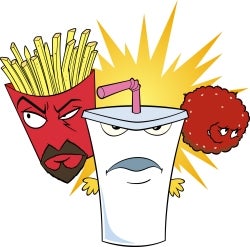 I saw that one last night, I fell out of the couch laughing.

/me was watching a documentary about the Mafia