User made maps to use on servers.
Forum rules
Post Reply
5 posts • Page 1 of 1

Personally i have never seen a baseball map probably sig already beat me to it a long time ago but I may be wrong. Anyway i decided to make one. Here is how you play... For the Red Team to cap they must score a home run meaning that the spawn in the outfield and they must rush to home plate steal the Blue Flag and jump on home plate and score a home run. Just be careful not to jump too high or you will be sent out of the stadium. For the Blue Team to cap they spawn by the Dugout and they must rush into the outfield and steal the Red Flag. After they get the flag they must go into the bullpen, in other words the tele, and that will wake you to the actual Dugout. Now in the Dugout cap the flag, but unfortunately since you went to the bullpen you were replaced by a sub. Now you must stay in the bullpen or simply kill yourself and spawn in the field again. Now the gameplay is a bit confusing about after you understand it is pretty fun. I still have yet to add a few textures but the rest is done.

Go try out the map it is being hosted at bzfmaps.net:6042 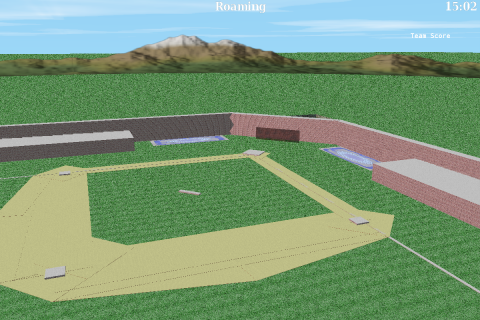 Sponsor my BZFlag servers or projects || My Personal Website || GitHub

Sounds cool, though I'll need to reread the instructions a couple times...

Time is a great teacher, but unfortunately, it kills all its pupils ... - Louis Hector Berlioz

For me, this map got nothing todo with baseball (execpt the layout of the map)

The main part is just a plain field, with the aim to get across the map, to capture the enemy flag. (What doesn't mean it isn't funny

Poor, though I will hold further judgement for when I have an opponent. It is too easy to kill yourself, by the invisible barriers and the out field.
Top

Areed. I rate unsatisfactory. Good idea, not too good of a map. Itd be better if you expand detail a little bit more......
Top
Post Reply
5 posts • Page 1 of 1