I made a map. it's a CTF between pink & blue, set in a stadium. there's no radar (so you can creep under the seating) and no crappy flags.

also, heads up: it's quite pink, but my screenshots came out waayyy pinker than it actually looks in-game. 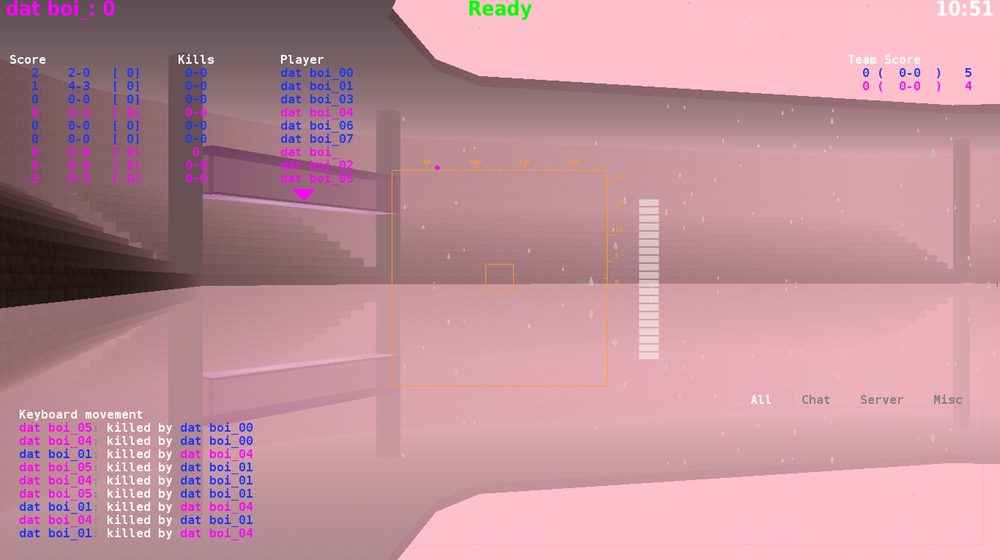 some more pics:
from the top of the pink base
the blue base
from top of stairs
under the stairs/chairs

I don't have any way to host it so you'll have to download the file and play locally unfortunately. let me know what you think, thanks all.

by tainn
The fog, sky and mirror work together quite nicely. Will definitely play on it, potentially regularly, as we need more no-radar maps ;)

by dat boi_
hey tainn, thanks for the kind words!

by Zehra
Nice map, looks good and is pretty playable.
One small tip though, I'm sure you used a 3D editor for this, so you probably did not notice this:

You could get rid of the decimal point and all the zeros behind it, since they do nothing.
The box below does the same thing and is easier to read and modify numbers:

Here's the whole map with the excess decimal points removed.

(Removing the extra zeros was done by using a text editor and search function included within it.)

I used BZEdit at first and then went back and added stuff with my text editor, but I didn't remove the decimal points.

It looks much more readable now (and searchable), so thank you.
All times are UTC
Page 1 of 1