User made maps to use on servers.
Forum rules
Post Reply
3 posts • Page 1 of 1

To the last map contest I also submitted a Capture The Flag map, which has I think an interesting novel twist; see the description below, and take a look at the screen shot.

This is my second (and therefore last) map for this contest, a Capture-The-Flag map for two teams. The key idea in this map is something that I don't believe I've ever seen in a CTF map before.

This one main idea is key to understanding and playing the map; I will start by describing it in a basic form, then explain how a more interesting variant is presented here. The larger goal of the concept is to encourage more team cooperation and communication - these are necessary here to win.

This map has the bases in opposite corners, and three main and separate paths to get from one base to the other: centrally along the diagonal, up across the top of the map, or down across the bottom of the map. In its simplest form (without teleporters) once you choose one of these paths, which start close to the bases, you can't change - the paths only intersect near the bases. Teams must choose on which paths they will concentrate strength, and then commit to those decisions (the only alternative being a
local defense of their base, which is no way to win). Once the tanks are out on one of the paths, the only way to get to another path is either to go back to their base or on to the enemy's base.

What this means is that one team can locally overwhelm the other team on one of the three routes - which results in a controlling a route to capture the enemy's flag and get home. The remaining two routes need some form of minimal defense, but a small, well-organized team may quite readily beat a bigger team. It is a matter of planning
and communication; certainly luck (say with spawn locations) will play a part, but assessing the enemy's intentions and coordinating an offense will give a team a substantial advantage. As a side note, this also changes the importance of certain flags - Stealth for instance can give you a strategic as well as tactical advantage, as your team may move
to dominate a path without tipping its hand.

The three paths have different playing styles - the bottom one is more open, the top has some vertical options, and the center one is more like street fighting; a team could pick its favorite. In the top and bottom routes there are good defensive positions near the chokepoints at each base, while the central path is designed for a good fight over the central teleporters. All of this is probably clearer if you view the map in BZEdit or
Observer mode in BZFlag, and get up high.

I wanted to allow a little more fluidity in play than 3 isolated routes would provide, so I did provide some interconnection. In the center of the map (in the middle route) are teleporters to the top and bottom routes (and one can get in to the center from those other paths as well). Topologically, it's as if you took the symbol for infinity and drew
a horizontal line through the middle - three routes to the left from the center to the purple base, and three routes to the right leading to the blue base (in fact this map started as such a network diagram). This makes the center of significant strategic and tactical value - a team controlling it can shift strength to the flanks as needed. It's like controlling the center of a chessboard - you can set the agenda, and keep the opponent on the defensive. This also means that the top and bottom paths have a midpoint worthy of control - the teleporter location, out near the non-base corners - an area sometimes of little interest in diagonal maps.

The map is completely symmetric - both sides see the same effective half-map leading to the center, so it is completely fair. As there are three separate main paths, it would be particularly good for a large number of players (say, 9 or more on a team). If the tanks are too sparse (e.g. 3 on a team) the strategic logic may be blurred by the tactical exigencies that arise, and the value of the map will be less clear. There are
75 boxes, 39 pyramids, and 4 teleporters, for a total of 118 objects which need rendering - lag should not be an issue even for a lot of users.

While there are a few vertical roads for play, this is not strongly emphasized here; it would be fine played ducati-style, without jumping. I've become somewhat attached to that style on the hepcat servers, and the loss of availability of the higher platforms here would not affect play very much. On the other hand, the few elevated roadways that exist might be nice if there are a large number of players, when random ground fire might rise to such a level as to be annoying. I'd recommend turning ricochet off just to keep it simple, especially with a large number of players - otherwise random shots may be bouncing around all over, and I hate it when I'm killed by an unaimed shot upon spawning. I put in a fair number of pyramids specifically to deal with this problem, but
I think only running it with ricochet on and then off with large groups will tell which is better.

I'm not trying to dodge the question of what bzfs parameters to use - rather, I'm sayingthat the main idea should survive whatever you'd like, and I strived to achieve this robustness.

As I use the name "The Purple Panzer", I wanted one of the teams to be purple; the other is blue, simply because I don't see it all that much on servers. (As the documentation seemed to be contradictory, the bzfs qualifier I use is "-mp 0,0,0,4,4,4", setting 4 blue, 4 purple, and 4 observers, 4 just for my testing purposes - higher is better.)

My name for the map is "BZ Pharoah", as if you view the map with BZEdit, rotate it a little and put it at a distance, the map seems to be a sort of stylized Pharonic face. Most of this pattern emerged naturally from the design constraints - it was only when it was nearly complete that the image become apparent. 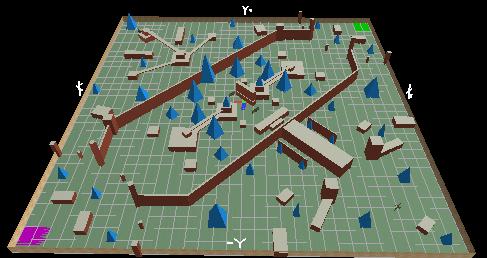 Have I seen this map before?
₪ http://www.garrettsites.net ₪

Only if you were one of the map contest judges.
Top
Post Reply
3 posts • Page 1 of 1