by yarro
Here is a picture of a map idea based on Interstate Interchanges, sort of a transportation theme. Perhaps BZFlag could be modified for traffic simulation. I Would put tele-porters at the beginning of each highway lane so when you get at the end of each roadway lane you would be into the beginning of it again. Meanwhile you could explore the ramps and over and underpasses as you drive to the other teams base. It has a long way to go but I have tests and models made and running and if it gets "interesting" I'll post the finished map.
by Grace F
Looks very interesting, nice planning!

If it's a CTF you're going for, try keepin' it symmetrical. Maybe it was symmetrical, I couldn't tell, hehe.

Will you allow for cars to drive on the ground or can you only use the roads?
by Spazzy McGee
I dunno - asymmetrical CTFs are hard to pull off, but they are really cool when they work.

It's a very nice idea - out of interest, how are you dealing with the sloping ramps?
by blast

Spazzy McGee wrote:It's a very nice idea - out of interest, how are you dealing with the sloping ramps?

From the image, it looks like there isn't any slopes, but instead are sudden jumps in elevation, where I assume a teleporter will do the work.

by yarro
Well, as far as sloping ramps, I'm going to step them down in each direction so you are always dropping down, bit by bit and when you get to the end you teleport back to the beginning, so you never have to hop "up". I could make flying flags where you skim along just above the surface of the ramp. Maybe someone can figure out how to code the terrain so that tanks can drive on non flat surfaces.
In the real model I'm going to use for VR or try to sell or use for a portfolio I will curve them, its time consuming, but I have an approach. I'll try a tensioned b-spline, which is what I used with the road shapes.
I'll probably cut down the model and mirror parts of it if I can figure that out, so that I do get the symmetry, then you can drive to the enemy base or take up defensive and offensive positions on the over passes.
I'm reducing the model as I don't want my free contributions to be taken and then sold by someone in BZland, so I'll mod it for the game and make it more playable.
How much I'll get done I don't know, but I'll work more this winter. It's been very time intensive so far.
by joevano
Driving on non-flat terrain isn't going to happen. That is a design choice that has been discussed many times on these forums. So your method will have to do...
by JeffM
It could happen in a Fork of the project. That sounds like what you are looking at, a new program based on bzflag for your traffic simulation needs, not just a bzflag map.
by yarro
I'm a realist about BZflag. It's fine as is.
I guess I could try coding if I wanted to add improvements I liked the idea off. Driving on other than planar is a technical challenge that would involve lots of extra effort and it was mentioned that it was already talked to death. It does seem that BZFlag has other potentials since it handles OpenGL so well. Perhaps someone will fork it, as mentioned.
Since the map is time consuming maybe I can throw out a few derivative ramp map objects for people to play with if they want, in the meantime.
by Agent West
about sloping ramps: couldn't it have something like
physics
name ramp
linear 0 0 1
end
???
that should bounce the tank up enough for it to move forward.

by Monster
Is anybody still working on it? I used to love the idea

by yarro
Still working on it, I just need to convert from sketchup to something like 3D studio max that I can import to Blender. Also since I spent hundreds of hours on it I am looking at the commercial value as well, I know some one will figure out how to make cash out of it once it is publicly available. At this point I may just dump it out as a prefab object and be an altruist - if any one wants to help with the conversion. It would be good to get assistance with tele porters as well since I don't know what I'm doing there. The idea would be to have the teleporter at the board edges where the roadway departs and be teleported back to the beginning of the roadway again as it enters the board so that you have an endless loop.

by yarro
Well... I am uploading a wings 3DS for people to play with. A couple of over passing level ramp objects made symmetrical for capture the flag. The wings file won't convert to a .bzw with errors causing a fail. As I am no programmer, or even that great a 3D modeler, I would appreciate any input-especially what steps I could use from sketch-up to blender, wings, using free tools that would make models that survive the export to a .bzworld file. Any one wants to collaborate a bit would be great as well for tele-porters, adding flags, additional geometry and concepts (and getting it into a bzw
modeling format).

Any way, have fun if there is any thing that can do with this.

by mrapple
i exported it (sort of) and am currently working on it.

im just adding some teles,walls,spawns,etc. this should be a cool map cant wait to see it in action!

-UPDATE- I am attaching the map file for you to play with. It sort of works, it really just needs guard rails and some better tele links. But here you go!

The map file is large to attach because i didnt group the meshes then rotate them. Here it is uploaded on megaupload: http://www.megaupload.com/?d=3M84UET6

by yarro
Great !I can't wait to see it in action

Since I can't figure out how to import into BZEdit I'm also still trying to learn blender and wings to get some more stuff output and uploaded on the thread.
Here is another screen shot of the original model I'm also still working on.
Made the original in Sketch up. Worked out a process of turning SVG curved lines from Inkscape and expanding them into planes. Used aerial photography for the template (would make a great texture as well which can be applied in Sketch up} The best imagery - high resolution ortho photo - can be obtained from the USGS seamless server. Check out North Las Vegas for the spaghetti bowl interchange.
Thanks again and I hope it works out

by Bambino
Looks really cool. I hope it's playable.

by blast
BZEdit can't support anything more complicated than boxes and pyramids. It's an old editor that isn't really supported anymore and lacks any of the features of 2.0.x (such as textures, mesh objects, groups, zones, etc).

The latest versions of Wings can export to BZW format. The other option would be to export to OBJ and then use Modeltool (source available in our SVN, Windows binary available somewhere on the forum) to convert the OBJ to BZW.

by yarro
Thanks for making the map, I'll try it out on BZW Test Launcher. I can't host but I'll play around with it.
Seems you know a lot more than me about meshes, I'm still trying to get bzworkbench to work or even the blender bzw importer. It's hard for me to figure scale at this point. I can at least get the model into blender so for me that is a victory. Oh, I guess I can try the converter as well

Thanks again for the help. Perhaps someone will host. My method in the past was to supply the map and the people borrow pieces for their own games. Kind of like posthumous immortality

Gave it a test. at least I see how I could improve my model, gives a sense of the play, nice!
I have added a screen shot. 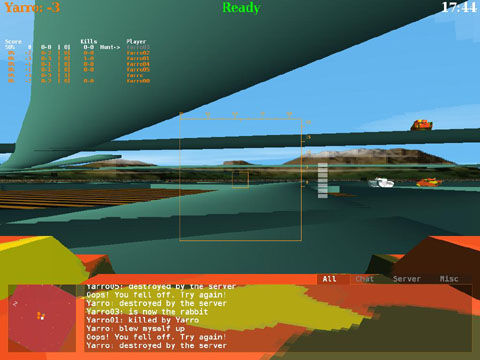 joevano wrote:Driving on non-flat terrain isn't going to happen. That is a design choice that has been discussed many times on these forums. So your method will have to do...

Well, there was this one map by Anomaly with a very very slightly slanted mesh I could drive up.

by yarro
I found a bit on slanted mesh pushing a vehicle along on the development end in in game code, sounded interesting.

by SammyTin
I hope everything works out. Loving transportation in all it's forms this looks extremely interesting. If you want any help I'm always here. But I'm probably not the best helper. (I can test *hint hint*)

by yarro
Mr Apple Computer made it playable, you could try it out, download is at http://www.megaupload.com/?d=3M84UET6 The concept still needs a lot of work but you could try playing it on your own computer using BZWTestLauncher-beta1 It will likely be a while before I can evolve a more finished map, lots of things to learn.

Here is a screen shot of the interchange in BZFlag I have to find a way to scale the game board larger to hold the whole object in a realistic scale.

by hutty
tried it out. This is awesome!

although some of the tellies dont work right. the concept is really there

by yarro
Thanks for the comment, glad you enjoyed it. I have a more developed model I'd Like to do textured median striping, etc. Very time intensive, though. In the future in car navigation will be similar so I though it would be nice if BZF got some virtual interchanges, then you could do navigation and routing with tanks, maybe even traffic simulation, non trivial problems remain, however - instead of radar you could have a navigation HUD ; )

If any one was watching this thread I have posted the interchange as a map object under prefabs and map objects " Freeways and City grids" The licence for this is Creative Commons 3.0. Please attribute to me when used, copy left if needed and not for commercial use without my permission. This a model of the North Las Vegas, NV single point urban interchange without slope so you can drive your tanks on it.