by blast
I've been working on a plugin that would help with creating screenshots for the BZFlag website redesign. This plugin allows setting up a stage of tanks and shots at fixed locations. So, for example, I can get something like this: 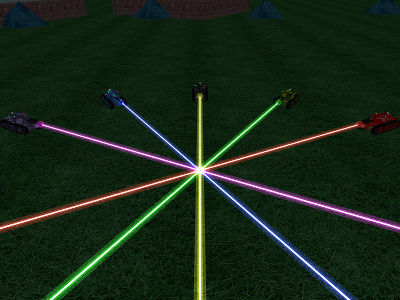 by_our_powers_combined.png
(821.54 KiB) Not downloaded yet


A configuration file defines the locations of the tanks and shots that should be staged. That gets loaded by the plugin, and then a game client is joined with enough solo bots to populate all the staged tanks. Some tricks are used to get the tanks/shots to hold still. Tanks are spawned slightly in the air and the gravity is set very low.

As for shots, the shot speed is set very low as well as the shot range. There are some side effects with this, especially with the experimental quality level. For instance, the experimental super bullet shot length is based on the shot speed, so this looks wrong with this plugin. There may be some issues with things like shot tails/trails. I also don't (yet) have anything hooked up to give tanks a flag, so as you can see in the example above it looks like they are shooting laser without a flag.

The code is located at GitHub. The plugin is released under the 2-clause Simplified BSD license. See the README file for more information.

by tainn
This certainly seems interesting.

When you mention this plugin being of help with creating screenshots for the bz website redesign, would that perhaps mean that the screenshots included there would change actively and automatically to project recent events and happenings on maps, or just being of help in general?

by Zehra
I really like the idea of this plug-in. It brings together a several ideas into a single design.
For map makers out there, this should offer the ability to create great screenshots and outline designs of maps posted.
(Tanks spawning and flag zones can be highlighted, scenes of what likely happens in battle can also be created...etc)
The possibilities this plug-in offers, along with the ones which haven't been explored, are something I'm looking forward to.

by blast
It's not going to be any kind of automatic system. I just mean that I'll be able to set up various scenarios and scenes and then take screenshots (mainly for some of the page banners). For instance, I can mess around with different settings to change the visual look while scene the same.