What do you all use for a graphics card?

What do you all use for a graphics card?

Just want to know what everyone uses for a graphics card? In general

A hardware system would be anyone who uses somethign like an nvidia GeForce card or an ATI radeon, or any other "3d" card.

A software system would be those who use a normal video card that does not help with the 3d rendering. These would be like Trident, Cirus Logic, and older cards or older laptop chipsets.

The reason for asking is when doing all the new graphics it's nice to know what people out there have to know what kinds of effects we can do.
Last edited by JeffM on Sat Mar 20, 2004 4:47 am, edited 1 time in total.

My main PCs have hardware (ATI, Matrox) 3D. I do have another one with just Intel 8xx chipset video. I'd imagine there are quite a few of those out there (manufacturers going with straight Intel CPU + chipset). So far this poll seems to say otherwise tho. And its no big deal to me if my one PC needs an upgrade.
Top

the 8xx chipset actualy does do some hardware rendering, It will do fillrate stuff. I do consider that a hardware system, just a slow one. Generaly people with the 8xx chipsets can run with textures and that is someothing generaly software systems can't do.

Lucky me's got an nvidia geforce 4 ti and a geforce fx something in both of my computers.

but i generally just use a Radeon 7000 in all my machines, i also have a SGI 320 which uses the Cobalt Graphics
Top

I've a GeForce3 in my main computer, but play on (alternately) a TNT2 and a Radeon 7000 more often. Use high (well, experimental as of yesterday) quality, linear/mipmap/linear (until yesterday) on the GF3, medium, nearest on TNT2 & Radeon, because no textures is ugly and good textures are unplayable. I should note that it also gets played on a Sis 6326 (software mode, lowest, no textures).
Top

the version that changed yesterday just combines the texture option with quality.

low and medium are the same as old low and old medium with textures off, high is the old high with textures on and set to the linear/mipmap/linear, cus 99% of the hardware cards support it, and you generaly need hardware to do textures. Experimental is the same as high right now. Just needed a place to hook up all the new stuff.

'twould be nice if medium used basic linear or nearest texturing; I did some tests about a year ago, and on the TNT I got 50 fps sans textures, 30 on either linear or nearest, but <10 with linear/mipmap/linear. Obsoleting the sweet spot would suck

...and the differences between low and medium with texturing off aren't really noticable (at least on my cards).
Top

it's suposed to be stable via config, but it's busted now. 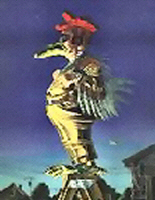 But it does have 128MB of RAM and I don't have to use my Intel 810 anymore.
"In addition to knowing the secrets of the Universe, I can assure you that I am also quite potty trained." -Koenma (Yu Yu Hakusho)

/me never uses anything lower than 512MB for RAM.
Top

blast is talking about the memory on his graphics card.

i know, i was talking about Video Cards myself.... you don't use/ or haven't heard of that new Radeon 10000 Pro Ultra Super Seceret Card?
Top

Geforce 3 or 4 i forget. has the 64meg memory. using nvidia's OpenGL drivers, runs pretty well. captain_proton sold me on openGl a long time ago.
want to see the difference between OpenGL drivers (nvidia 2 32Meg)?
[/img]

bzwindow-no-opengl.JPG
this is no gl driver
(72.57 KiB) Downloaded 38 times

My Sir that images remember me when I started shoting with BZ.........

I have a n NVIDIA Quadro with 64MB of Memory on one of my computers.
Top

Because I get all the cards for free!

Use an ATI Radeon 9700 Pro in my main system. I've approached 500fps in bz with full textures on. WooHoo!

I am currently saving up for a Power Mac G5 with Radeon 9800 AIW PRO. That card is like the best... Can't wait!
Top