Make suggestions for improving one of the best games on the net!
Forum rules
Post Reply
15 posts • Page 1 of 1

What if there was some object property that caused certain events to happen when the object is shot? For instance, say there's a popular camping spot, up high and out of reach. You could have a target that, when shot, triggers a world weapon SW in that spot to kill any camper.

...and the versatility would be greater than that, too... maybe even support for plugin-related events? shoot the target for match start?

Just an idea. thoughts?
Optimism is just a milder alternative to denial.
Top

I like it. Instead of CTF you could just shoot a target and get points for that.

I've thought of this feature too. I would love to see it implemented, and I am guessing it probably will be in the 2.1.x line, where shot physics are preformed on the server side.
Top

Was just thinking about that...

My idea was to have doors that would open for CTF matches. One team member would have to get by the door, and another would have to shoot the trigger. You'd only be able to capture the flag if you work as a team.
Top

Longhair wrote:Was just thinking about that...

My idea was to have doors that would open for CTF matches. One team member would have to get by the door, and another would have to shoot the trigger. You'd only be able to capture the flag if you work as a team.

That seems a bit more complicated, seeing as how map objects don't move... well, they do, but AFAIK no solid objects move... although that may be in progress.
Optimism is just a milder alternative to denial.
Top

But the trigger could turn of a world weapon that is blocking entry to an area for now.
Top

This sounds unrelated... but I thought of this as I was reading this line of discussion.

<p>Imagine if servers could be dynamically linked to one another (by owner choice as to whether or not participate). A particular type of warp could warp to another available server insetad of just on the local map. Imagine what that would do for chasing someone?</p>
Top

I believe switching servers dynamically would be virtually impossible. But I did see a single map a couple weeks ago that incorporated three or four popular maps, one on top of another. Sure the upper level maps lose the ground (and BU), but that accomplishes the same effect you are thinking of Trucker.

On the otherhand, it was a huge map...
Top

I guess you're right about it being impossible. Either that, or it would be limited to only those with a fast broadband connection (perhaps relying on a server ping to test the conncetion). I would imagine that order make it work, you'd have to be able to download all dynamically linked maps. Even still, there would be a delay between servers handling the transaction for teleporting tanks. I suppost that the background would have to be some clouds or something to make it look like a spacey transport while the servers negotiate information.
<p>An alternative to that may be something similar to what I have seen on opennap file sharing in which (as best as I understand it) there may be several servers within a unified network. So, you could teleport to another server within the network rather than to anyother dynamically linked server worldwide. That doesn't solve the problem of having to download all maps unless all maps in the network were relatively small.</p>
<p>Oh well, it was a cool thought anyway. Perhaps a bit before its time, though...</p>
Top

Dynamic server switch would be a bit more complicated than it's worth, I think... what about carrying flags into other servers? and what about CTF?

but yeah, combined maps give a similar feel. I did one that's pillbox + grassroots + overlord, all laid out on the ground instead of in the air. too bad I don't have anywhere near enough bandwidth to run a game big enough for that.
Optimism is just a milder alternative to denial.
Top 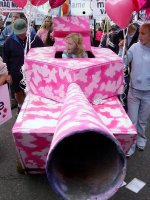 I thought about the target idea but it would mean a no richo map because the only real way to make something for a target would be to use a portal.

Say if I wanted to run a CTF map and I put a laser infront of the base so that there was no way to capture unless your teammate shot the portal making the laser deplete for probably 5 seconds. Because as L4m3r was saying..


l4m3r wrote:That seems a bit more complicated, seeing as how map objects don't move... well, they do, but AFAIK no solid objects move... although that may be in progress.

...it may eventually become available but for now it seems highly unlikely.

lol. you could have a chain reaction of worldweapons and targets - you shoot a target, then that fires a worldweapon that shoots a target that then fires one that shoots antother, ect, ect, ect

or, you could make it so that you have to hit 2 targets at once with an SW for something to happen...... oh my.
this would be brilliant for the tank driving 101 server
"Life is what happens to you while you're busy making other plans." - John Lennon
Top

/me waits for this one to be shot down
...This has been a recording.
Top

/me agrees with vader. but it is a good idea lamer.

on the map thing, lamer made a map that combined pillbox, overlord, and babel with a fourth section that contains red and green bases and teles to all the sub-maps.
Games don't make people violent, lag does.

For this to work, you would either need: But in my opinion, this is a good idea. (I mean with plugins). This would probably change the gameplay, less so with plugins - not a scripting language, so I'm pretty sure it will be shot down.